Bon jour tout le monde! Nous sommes a Paris, dans in apartemont petit e mignon! I think I spelled that all correctly…thankfully I can speak more French Than I can write. Either way, I am writing to you from PARIS! 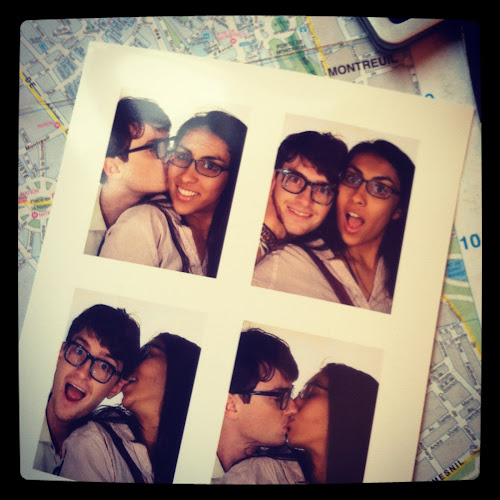 Pictures from the phtomaton in the metro!
The first few days have been a whirlwind of discovery–the bakeries with fresh bread every day, the cafes that serve wine for ridiculously cheap, the cheese…oh the cheese. I cannot even begin to describe what my first taste of chevre in France was like. A totally new experience–I have never had something so rich in flavor, creamy, and fantastically textured before. Needless to say we have beaucoup du’fromage in our fridge right now.

Notre dejuner cafe avec quatre fromage, noix, e un petit salade
So I have a few things that I’ve noticed about Paris and Parisians aside from the cafes, etc.
1. They’re not as rude as people say they are. I had this expectations of Parisians walking around with, well…for lack of a better way to put it, sticks up their ass (pardon my French). But their not. For the most part people have been quite nice to us. You’ll have your random rude person or shopkeeper, but nothing like people make it out to be. I will say however, it is much appreciated when you try to speak a bit of French to them. 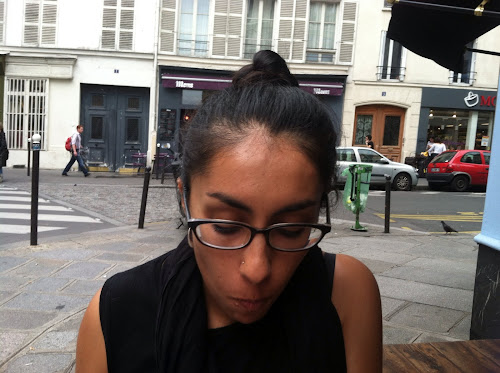 Je manges à l’extérieur d’une boulongarie
2. Paris: the land of green eyes. I’ve always wondered where all the green eyes in the world were…now I know: Paris. In the States, I almost never see clearly green eyes, but it’s common place here! I find myself constantly staring at someone’s eyes, shocked by how green they really are.

Mon beau mari
3. They dress exceptionally well. Initially, I simply thought that all Parisians were just…gorgeous. However upon closer inspection, I’ve come to realize that it’s not the facial structure or anything that separates them, it’s the mode of dress. The day-to-day is simply a bit fancier. It is rarer to see jeans and a t-shirt, but instead a cute pair of colored slacks, a nice shirt or blouse, and a scarf fashionably hung around a woman’s neck. For men, nice jeans, a casual button up, and a casual blazer. The casual blazer is BIG here for both men and women. Anyways, this leads directly to my next Paris Travel Tip… 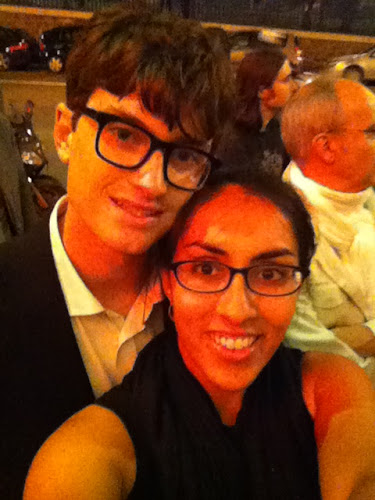 Nous sommes a la fete de la musique, 21de juin
Paris Travel Tip #2 Pack few clothes, but nice ones.
Why? Because the easiest way to be spotted as a “tourist” and taken advantage of–either ripped off of worse, robbed–is to look like one. This is especially helpful, I think, if you, like me, do not speak the language fluently.
Anyone that has been inside my closet would most certainly not call me a fashionista by any measure. But when we were packing for Paris, I made a promise that I would pack no more than one bag for 3 weeks, and it would contain travel-able but chic clothes. So I packed 1 fancy dress, 1 simple day dress. 1 linen skirt, 1 pair of blue slacks, 2 T-shirts, 2 tank tops (one formal, one informal), 1 button down shirt, and 2 scarves. These, along with 3 pairs of shoes, provide me with a solid rotation of outfits and allow me to blend in with the crowd.
Additionally–bringing a large purse with a zipper has been super helpful in allowing me to minimize the number of random bags we have to carry!

One thought on “Parisian thoughts”