Tout a Paris est miniscule. If my French is somewhat correct, the sentiment I’m trying to get across is that everything in Paris is tiny. The apartment in Paris is tiny, the shower is such that I have to you have to literally turn and slide to get in, and the kitchen makes the galley kitchens I was complaining about in Boston apartments looks huge. 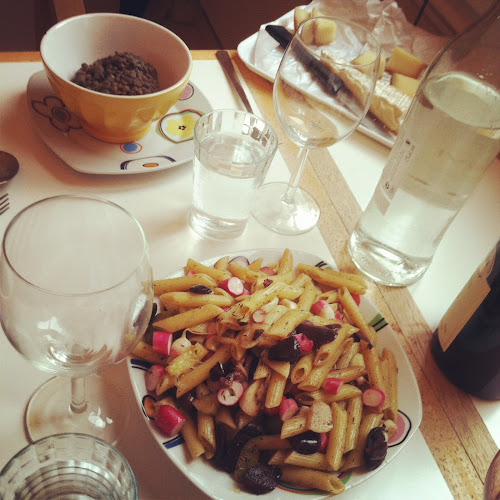 A tasty meal of lentils and pasta with radishes,olives, and mushrooms

It’s time to face the facts: I have been spoiled by a large kitchen in Texas, with a gas stove, a huge oven, and tons of prep space. Not that I would trade that for living in Boston next to my family, but still, my opinion of “normal” has shifted after two years of being spoiled. 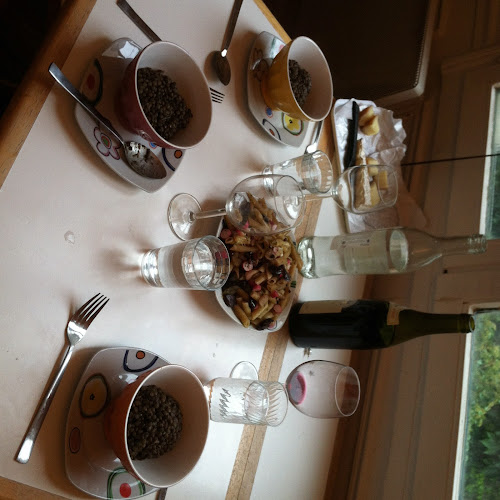 This kitchen is about big enough to fit one person…or more like 3/4 a person. You stand in one place and just turn in order to reach EVERYTHING. To be completely honest, when I first saw it I started laughing and nearly had a cooking melt-down…how was I supposed to cook in a kitchen that small? 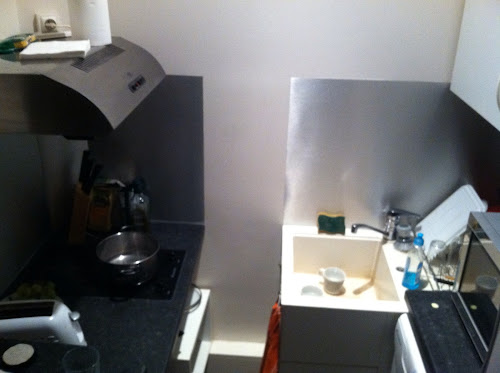 For three weeks?! But a cook is a cook…and you cook with what you got! So I pulled it together…and tried it out.

After a few spills, a few bumps on my head from hitting it on the same damn cabinet over and over (literally, there is a bump), and one instance of veggies going flying when I tried to be supremely awesome and flip my food during a sauté situation, I’m happy to report that it’s not that bad. Except for lacking an oven, it’s pretty cool. I have all my spices, my tools, etc. It also has a pretty sweet washing machine in it! Okay, so maybe it’s not ideal, but I can make some pretty darn good meals in that kitchen. Don’t underestimate what you can make with a pan, some olive oil, veggies, and some spices.

Basically, my point is–don’t judge a book, or a kitchen, by it’s cover. You can make the most of anything..and make it pretty darn tasty.

One thought on “Mita vs. the Parisian kitchen”