When I woke up yesterday, I checked my phone. Hillary Rodham Clinton took the popular vote in California. Not by a little but by winning nearly 56% of the vote, a wide margin. And with that, she effectively became the democratic presidential nominee.

I did not think I would see the day that a major political party in the US nominated a woman to be president of the United States. It’s been happening, I kept getting excited, but California sealed the deal. I was ecstatic. This is a milestone, a marker of progress. Not that we are done, not that everything is perfect. Just like when President Obama was nominated and twice elected, it does not mean our issues with gender and race have been fixed in this country. Instead it means that we are progressing. It means that a woman who has fought tooth and nail with poise, intellect, and strength can bring home the nomination despite conservative and media mud-slinging since the 1990s.

I’ve heard people say throughout this election cycle that voters are not excited about HRC because they don’t see the bumper stickers, or the media coverage of impassioned voters rushing stages or youth campaigning vigorous. I’ve heard people say that virtually everyone under the age of 45 does not support Clinton. Or that women vote for her because they voting with their vaginas.

Well, I’m excited. The popular vote does not lie. Her supporters are not out there, for the most part, going well, let’s just vote for Clinton I guess. They are out there saying dammit, I’m voting for HRC because she’s experienced, capable, and I think she’ll make a darn-tootin’ good president. The media coverage and talking heads don’t always reflect the truth of the people–we are excited. And yes, part of the reason I’m voting for her is because she is a woman. A woman that I believe will understand the issues that face me. A woman who has been slammed by the system over and over and has gotten up every time and smiled while doing it, as women are forced to do. I am proud to be a part of this historic moment. I am proud to have voted for her, to agree with her and disagree with her, and to be able to show my future nephew a world in which a woman played a “man’s game,” and made it hers — made it ours. 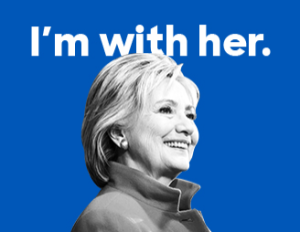